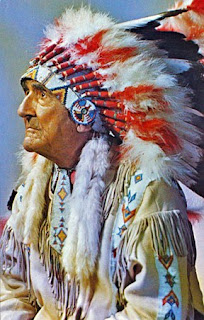 Tokalu Luta was born on 11 June 1870, on the Pine Ridge Reservation,Thunder Butte, in the Dakota Territory.  He was a Ogala Lakota Sioux Native American.  He became known as Chief William Red Fox.  His father was Chief Black Eagle and his mother was White Swan, the sister of Chief Crazy Horse.  Thus, he was a nephew of the famous Sioux leader Chief Crazy Horse.  Chief Red Fox lived through Custer's Last Stand at the Little Big Horn and gives a chilling account of it in his memoirs.  He was six years old at the time of Custer's Last Stand.

"I was six years and fourteen days old at the time of the Custer fight. As it was told to me by my father Chief Black Eagle and my mother White Swan, the sister of Chief Crazy Horse….We left Pine Ridge [Reservation] the eight day of May 1876. Arrived in Montana about June the fifth. My people expected truble they divided up into three different villages. In case of attact they would not be caught in a trap. They knew Custer had left fort Lincolm for the Little Big Horn. Chief Gall and Chief Two-Moons sent word to my uncle Chief Crazy Horse that they were on their way to join him in case of truble with Custer they hatted him for the killing of the fifty three old women men and children and for burning their village several years before [This is a reference to the battle of Washita River, Nov. 27, 1868] and he Raped Black Kettle fourteen year old daughter she gave berth to a boy who is known as Yellow Hawk that they claim is his son from that attact….

On Sunday morning June 25th 1876 Custer…divided his forces into four grupes send Reno to attack my people from the southwest of the Big Horn River. Benteen from the northeast. Godfry and McDugal with the supply train….He told them he would…make the attact at four oclock….About 2 PM…we heard shots fired later we were told that my father and Chief Standing Bear had blocked Captain Benteen from crossing the river. Ghost Dogs, and Crow King had blocked Reno and his men Stinking Bear had Blocked Godfre and McDougal.

About 3 oclock Custer appeared and my uncle Crazy Horse rode out and then retreated like they were afraid. Custer came riding on then. Chief Gall came out to the left side of Custer and Two Moons and his Cheyenns came to the right of Custer. When Custer seen this he started his charge then he dismounted, placed his men on high grounds his horses placed under senteries the Indians made a curcle around him then rode their horses accross the circle kicking up durt [to] stampead his horses. Then the Indians made their attact. Custer bugle sounded for the sentries to bring the horses but they had been killed his bugle sounded for retreat but…most of his men and horses were killed. some said he was the last one to die but that not true. Captain Kegho was the last man to be killed and his horse Comanche was the only horse alive….my people said no one knows who killed [Custer] or when he fell. they say the battle lasted forty minutes….the Indians had better guns than the soldiers good horsemen and knew the country and planed how to fight the battle…."

Buffalo Bill
Wild West Show
In 1893, Colonel William Frederick Cody, better known as Buffalo Bill, visited Pine Ridge Reservation to recruit Native Americans as performers in his "Wild West Show," and asked Chief Red Fox to join the troupe of performers who were about to make an appearance at the 1893 World's Columbian Exposition (better known as the Chicago World's Fair). Buffalo Bill also asked Chief Red Fox to serve as a translator and "have charge" of the Native Americans that were in the show. Red Fox agreed to join the traveling show and worked for Buffalo Bill for many years. In 1905, Chief Red Fox "scalped" King Edward VII in a stagecoach robbery scene in a Wild West show performance in London.

Chief Red Fox appeared in over 100 movies, many of them were Silent Movies. He appeared in the following Movies:

War on the Plains,
When the Heart Calls,
Daughters of the Tribe,
Toll of the Warpath,
Red Fox and Wild Flower,
Perils of the Plains,
Medicine Boy,
The Covered Wagon,
The Vanishing American,
Desert Gold,
The Wild Horse Massacre,
The Flaming Arrow,
The Law of Crippled Creek,
The Round Up

Click on the following for information on other Sioux Chiefs:
Sitting Bull
Red Cloud
Crazy Horse